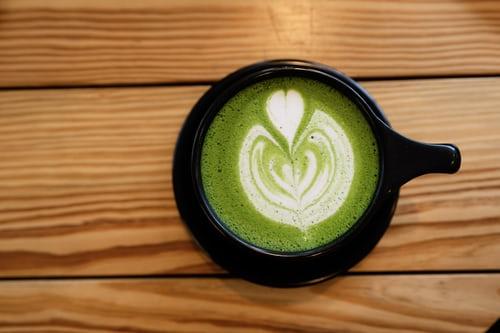 Reduces Risk of Some Cancers

For example, a study found women who regularly drank green tea had a 20-30% lower risk of developing breast cancer. Breast cancer is one of the most prevalent cancers in women. An additional analysis of 30 individual studies found green tea drinkers to be 42% less likely to develop colorectal cancer. The preventative power in itself is enough reason to start adding antioxidant-rich green tea into your diet.

Green tea contains two major components that promote alertness. The caffeine in green tea helps increase focus, reaction time, memory and overall mood. Another plus is that it has less caffeine than coffee, so you get the same benefits without jitters or anxiety. Green tea offers the lowest level of caffeine you can get while still experiencing benefits on mood and athletic performance. Besides caffeine, green tea contains L-theanine which functions to increase the levels of GABA in the body. GABA is an amino acid in the body that acts as a neurotransmitter in the nervous system and can reduce anxiety and improve mood. Caffeine and L-theanine working together means a healthy boost in brain function and temporary lift in mood.

Green tea also can prevent future disease. The antioxidant properties that prevent cells from damage do the same for your brain. Regular green tea intake can protect the brain over time from oxidative damage, keeping your cognitive ability sharp as you age. The bioactive compounds known as catechins found in green tea protected neurons when tested on both animals and humans. This means less likelihood of developing neurodegenerative diseases like Alzheimer’s or Parkinson’s.

Inflammation throughout the body accounts for so much disease and damage to the body. The World Health Organization notes that these types of diseases are the most significant cause of death around the world, and especially in America. 3 out of every 5 people around the world will die from some form of chronic inflammatory diseases. Some common conditions are diabetes, cardiovascular diseases, stroke, respiratory diseases like COPD, arthritis or joint problems, severe allergies, and some cancers.

In a study of both green tea and black tea, green tea proved itself to have anti-inflammatory properties greater than that of black tea. Catechins, the same bioactive compounds that can help prevent cell damage, prevent inflammation. Other teas have these beneficial catechins, but green tea provides it in the highest concentration. If you struggle with an inflammatory condition or you simply want to address mild pain or discomfort, the benefits of green tea are worth a try.

The surge in type 2 diabetes and cardiovascular diseases in the U.S. means it kills more people each year, and the onset becomes earlier every year. For that reason, it’s never too early to make efforts toward preventing these two extremely common conditions. If you regularly eat fried foods, sugar or excessive animal products, these conditions are something to think about in the future.

Green tea may help with insulin sensitivity which is a major concern in diabetic individuals. In comparing numerous studies, those who drink green tea often have anywhere between an 18-42% reduced risk of developing type 2 diabetes. The same was found for common cardiovascular diseases, as green tea helps keep cholesterol levels in check. Studies found people who drink green tea have up to a 31% lower risk of dying from a cardiovascular disease.

Finally, if you’re on a fitness journey that involves weight loss, one of the most widely recognized benefits of green tea is its fat burning power. According to research, drinking a cup of green tea can result in a 4% increase in calorie burn and a 17% increase in fat oxidation. On its own, this won’t be a miracle worker. But pair it with diet and exercise, and you’ll get an extra boost toward your goals, speeding up the process. Caffeine also can increase athletic performance, so the caffeine kick can mean you push a little harder in your daily workouts, thus burning more fat.

Some studies found green tea drinkers ended up with significant reductions in their overall body fat percentage and their measurements after 12 weeks. The effects might not be outstanding, but the benefits make a daily cup of green tea a great addition to your fitness regimen.